The deep friendship between young theater actresses Maria and her Jewish friend Lea gradually starts to break as Marias husband Hans goes from being a young adventurer to a high ranking SS officer. But on that day of the Jewish deportations in Munich, Maria comes to a momentous decision which proves what friendship really means to her. She takes on Leas child Charlotte to save her from being deported to the concentration camp, thereby risking her own life and ultimately loosing Hans. Marias story shows that in the end friendship can triumph over terror and death. The film is inspired by the childhood of Charlotte Knobloch, Vice President of the World Jewish Congress and supporter of this project. 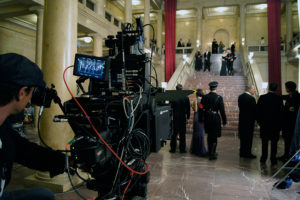 Stereotec finished shooting “Call her Lotte” – a 3D drama short about how the friendship of two women helps saving a child from the Nazis during the 3rd Reich. It was shot with one STEREOTEC Midsize Rig and the new STEREOTEC Lightweight Rig. DoP was Christof Wahl, who is cinematographer on Germany’s most successful movies. Stereography was done by the STEREOTEC team led by Senior Stereographer Florian Maier.